Coyotes lurk around our neighborhood and are active at night. Do Coyotes eat rabbits?

Is a coyote faster than a rabbit? Keep reading to find out 9 ways to protect rabbits from coyotes. There are many other helpful tips as well.

In this article, we will discuss the topic, “Do Coyotes Eat Rabbits?”

Yes. Coyotes are definitely one of the top predators of rabbits. Since coyotes are omnivores, they have no problem catching different types of smaller animals including rabbits and rodents.

They do not focus on larger animals such as deer, elk or moose like wolves do. Coyotes can eat fawns, or other types of infant animals, insects, livestock and poultry as well.

What Eats Rabbits in the Wild?

There are many predators of rabbits including:

Rabbits are quick enough to outrun many predators with their zigzag motions, but a coyote is faster and can catch one if they are one step ahead.

Rabbits must also look up above for opportunistic birds of prey who can swoop down during their hunt. Rabbits are in constant alert with excellent hearing and vision to maintain their safe positions in warrens or burrows.

Yes. Coyotes are able to consume almost the entire rabbit. They can eat the fur, bones and internal organs of a rabbit. You might not see anything leftover a coyote is finished with catching a rabbit.

They may choose to also carry the carcass away and hide it in a location that is safe from other predators or scavengers.

This is why it’s extremely important to protect our rabbits from opportunistic coyotes who can enter our properties by either jumping over or digging underneath fences that are not long enough or secured under the ground.

Is a Rabbit Faster Than a Coyote?

Although rabbits are nimble and quick, they are not as fast as coyotes. The top speed of a coyote is around 43 mph. Many rabbit species are not able to crack over 30 mph.

This means that animals such as a fox, coyote or a greyhound can outrun a rabbit in a race or chase. Rabbits have to rely on other techniques such as running and zigzag patterns or escaping through underground burrows that larger predators cannot reach. 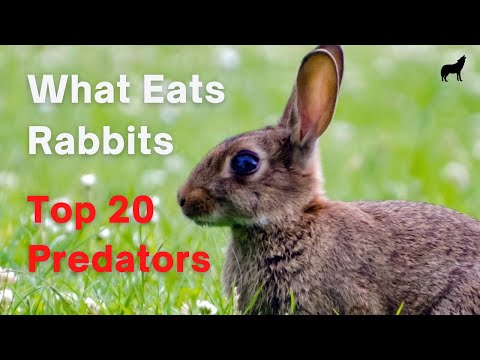 How Do You Keep Coyotes Away From Rabbits?

The best way to keep coyotes away from rabbits is to create protective fencing. Add a perimeter fence around your rabbit’s territory.

This fencing can also keep out other types of predators such as foxes or wolves. Anyone who is trying to steal your rabbit will have a hard time entering this territory as well.

You can also create coyote deterrents such as:

Do Coyotes Eat Their Prey Alive?

Yes. A coyote is noticeably able to eat animals alive. They will choose to not immediately kill an animal by biting at its neck.

They might instead choose to bite an area such as a hamstring to cripple their prey. This is how coyotes are able to eat their prey alive. They choose to disable their prey first and then rip out the underside of the animal until it slowly loses enough blood.

Yeah. Coyotes can easily chase down rabbits because they are faster. Rabbits are more nimble and quick as they use zig zag running patterns to evade larger predators that are faster than them such as coyotes.

Rabbit can evade buy climbing up, but they would prefer to dive down into burrows that they have dug for these occasions.

The added safety of these underground burrows and warrens keep rabbits away from harm. They have dangers from up above such as birds of prey and on the ground like coyotes and wolves. Coyotes will also hunt down other mammals including:

Yes. Bobcats are also known to be able to hunt and catch rabbits. They are focusing their attention on other animals including:

Rabbits are also on the list of prey that bobcats regularly keep their eye out for. They can chase down a rabbit that is vulnerable for attack or they will focus their attention on sick, injured or baby rabbits that are easier to prey on.

Why Do Coyotes Eat Rabbits?

Coyotes need to restore their nutrients including vitamin B12 and E. Rabbits contain high amounts of these minerals and nutrition for predators such as coyotes.

Rabbits are also able to be chased due to their slower speed because coyotes are faster, highly adaptable and very opportunistic.

Rabbits are on the menu for this particular reason and more so they must do their best to stay hidden, maintaining their safety in underground warrens. They are always alert for incoming predators such as coyotes.

Are Rabbits Easy to Catch by Coyotes?

The coyote is not going to risk death or injury when taking down an animal. They like to hunt alone and focus on smaller animals like rabbits.

It will stalk their prey and not lose too much energy while doing so. At the right moment a coyote can pounce on a rabbit and eat it alive. Coyotes can hunt at night while all rabbits are resting.

They are opportunistic hunters and will do whatever it takes to take down a rabbit with the least amount of force and energy. They’re able to do so by outrunning a rabbit as well.

9 Ways to Protect Your Rabbits From Coyotes

We can certainly be proactive if we’re trying to protect our rabbits from lurking and stalking predators such as coyotes. We can do the following:

Do Coyotes Kill Rabbits for Sport?

No. Coyotes are killing rabbits for survival. This is the nature of the environment that they live in. They need to continue moving on and staying hidden from other larger predators or humans.

A rabbit is a quick and easy target for a coyote on many occasions when they are hunting at night. A coyote is hungry and will kill as much as it needs for survival.

A rabbit is a nutrient-rich prey for medium-sized predators such as a coyote.

Can a Coyote Kill a Rabbit That Is Twice Its Size?

Yes. There are very large rabbits or hares that can look superior in size to a diminutive coyote, but the predator will always survive and win in the end. This is because the coyote has faster speed and a larger or stronger bite.

They can defend themselves better and will opportunistically kill a rabbit in multiple ways such as biting down on its hamstring or snapping their extremely strong jaws on the neck of a rabbit who cannot defend itself as well.

How Can I Protect My Rabbits from Coyotes?

Use mothballs keep coyotes away by placing them around the perimeter of your property. You can also use ammonia soaked rags, pepper spray and better fencing solutions that is taller and dug deeper into the ground.

On most occasions, coyotes should not be able to open a rabbit cage. If you’re using a very old-fashioned lock system that is easy to lift up, a coyote might be able to do so. More often than not, hutches are secured safer than that.

They will not be able to unlock it and will try other ways to get inside. They will dig underneath, jump over or squeeze through the bars. The most common way that a coyote is going to get to a rabbit is if the gate is accidentally left open.