If you love hamsters, you might want more than one. Will hamsters kill each other? Keeping them together poses all kinds of risks.

Is it normal for hamsters to fight? How do you tell if hamsters are fighting or playing? How many hamsters is too many? Are they cannibals?

In this article, let’s take some time to really figure out, will hamsters kill each other and how to prevent anything like that from happening.

Will Hamsters Kill Each Other?

Yes. Unfortunately, the risk of putting two or more hamsters together runs the possibility of them hurting or even killing each other.

This is because hamsters are territorial by nature and solitary rodents who prefer to be kept alone under your care. Once hamsters reach an age of 10 weeks or older, they should not be kept with others.

There will be bullying, fighting and possible death including the possibility of cannibalism as well. Mothers may kill weaker babies to save the lives of the rest when she perceives that resources are limited. Will 2 Hamsters Kill Each Other?

Hamsters can be cannibalistic when fighting to the death. 2 hamsters can and will fight because they are innately territorial.

The animal kingdom is unforgiving at times and hamsters have had to learn to survive with their diminutive frames by relying on their solitary survival instincts.

This means that resources are always perceived as limited and they do not wish to share the same:

Another hamster may threaten the longevity and abundance of what keeps this independent hamster alive and thriving.

Hamsters are sweet, cute, loving and friendly to us, but they are also cannibals as they perform the unthinkable actions to some of their babies or counterparts of the same or different species.

This doesn’t mean that hamsters are always aggressive. This is merely due to survivalism in a world where resources are consistently scarce and animals must adapt to it.

A pet owner of multiple hamsters is best prepared to keep them in separate enclosures or cages. Keeping them together would mean to provide them with an abundance of space, food and water to reduce the chances of fighting or cannibalistic urges. Installing dividers would help as well.

Why Hamsters are Cannibalistic

Its usually a simple matter of being territorial by nature. Hamsters don’t want to share available resources and they know that their survival depends on it.

Little do they know that we would provide as much more food and water for as many hamsters that we wish to keep, but we can’t relay this message clearly. They will fight or consume their young in an attempt to maintain a steady supply of survival resources.

Babies who are stillborn or die prematurely are routinely eaten by mothers. Death attract predators and cannibalism might be a response of removing the scent of a dead hamster to avoid intruders. 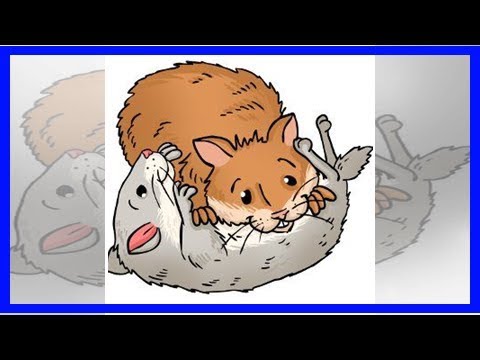 Do Hamsters Fight to Death?

Yes. Hamsters can be seen fighting to the very end when one succumbs to injuries and dies. They are fiercely able to withstand trauma and pain during battles for territory.

They will attack with teeth and cause serious harm if we don’t step in and separate them. Fights to the death are common among hamsters.

How Do You Tell if Hamsters Are Fighting or Playing?

You will know that one particular hamster is being attacked often and losing the battle when they become:

A bullied hamster could become aggressive with you if you wish to interrupt this sulking and antisocial behavior. She or he may have given up and death by illness or malnourishment may soon come.

Is It Normal for Hamsters to Fight?

Yes. It’s normal for hamsters to fight and we must either separate them or get a very large cage. Insisting on keeping two fighting hamsters together can do more harm than good in this scenario.

Partitioning the cage and creating quadrants is also a way to divide the territory in order to keep them calm and the boss of their own space without fighting about it.

Do Hamsters Squeak When Fighting?

You might hear rustling in the cage and discover that your hamsters are fighting once again. The fighting could be accompanied by shrieks, shrills and plenty of squeaking noises as this is common for hamsters in times of threat or severe stress.

They are issuing the squeaks at first to warn the other to back off before things get super aggressive. Then the teeth come out and they violently attack to harm, injure or kill the other for territory and ultimate survival.

How Many Hamsters Is Too Many?

One hamster per cage is plenty. Two hamsters in the same cage means that there should be the ability to separate them with dividers, quadrants or plenty of space with an abundance of food to never feel insecure or perceive that resources are running low.

Hamsters can pair off together and live in peace in some cases , but adding in a third is a sign of trouble. When hamsters reach 10 weeks of age or older, it’s best to separate them if they haven’t paired off.

Will Hamsters Fight if Put Together?

The older they get, the more likely it is for these two hamsters that are not a mated pair to fight. They will not enjoy being put in the same cage together after arriving from the pet shop where they lived in a larger space.

At ten weeks of age, they show much more territorial and survival instincts which may involve ferocious and fierce fighting tactics to remain the sole survivor of the limited space that they perceive can only handle one of them.

Can You Put Syrian and Dwarf Hamsters Together?

No. Putting a larger Syrian hamster with a dwarf hamster is a potential disaster for the smaller and weaker dwarfs. It’s best to keep hamsters on their own or put two dwarfs together.

You can keep hamsters in pairs and groups, but not if you don’t provide enough space for them. Your aim is to prevent territorial disputes and battles to the death. Syrian and Chinese hamster species are better kept alone.

Will Dwarf Hamsters Kill Each Other?

Dwarf hamsters can kill and become cannibalistic when they feel like the space is too small or food supplies are too limited.

This is why we advise keeping multiple dwarf hamsters together if they haven’t paired off peacefully. Overcrowding is a major issue and needs to be addressed by adding more space, dividers, quadrants or separate cages.

Why Do Hamsters Eat Each Other?

Hamster may eat each other due to the following reasons:

If the resources are perceived to be insufficient or the attitude towards territory is such that it’s a limited space, they will fight, kill and possibly consume the defeated member of the fierce battle. What is Cage Rage in Hamsters?

Cage rage refers to any animals kept in cages who fall victim to a psychological disorder and wish to become overtly aggressive to anyone (including you) who comes too close.

This cage rage can inevitably lead to cannibalism. Hamsters with cage rage will not get sufficient rest and may hurt themselves as they gnaw on their body or give up eating food that is offered.

Why Do Hamsters Eat Their Own Babies?

A poor diet or one that lacks in Vitamin B3 from eating too much of the same grain can lead a hamster to do something desperate. Eating their young gives them replenishment of Vitamin b3 and other nutrients that they are not receiving from a site that relies heavily on corn or another single grain.

The stress of giving birth can result in a new mother doing this untenable act of eating its young. Also babies that are stillborn or die shortly after, are consumed rather than leaving a dead body to decay or give away the location of the territory when a possible predator sniffs it out.

If a human touches the baby that is still alive, this may alter the scent of this new pup. A mom may think this baby doesn’t belong to her like the rest of them and decide to consume this outsider.

A female may attack a a male hamster for 2 reasons:

This reaction of aggressiveness gives a female more time and space to not fall victim to the demands and wishes of a mate who is ready to mate as much as possible.

Females also become more aggressive when defending their babies from possible outsiders or males who did not father these new pups.

What Is Hamster Bruxing {Everything You Need To Know}
What Kind Of Sand Do You Use For A Hamster Bath
What to Do With Old Hamster Cage {Best Ways to Clean and Dispose}
Can You Use Polysporin On Hamsters? {Safe To Use?}