When a rabbit stops moving and remains completely still, it can get confusing. Do rabbits play dead? How can you tell?

Is your rabbit flopping, in shock or genuinely and gravely ill? Did they just get scared by a near by predator or something else in the environment around them?

What has caused them to react like this? Below I will cover everything you need to know.

Yes. A rabbits will play dead when they feel neglected or are trying to find a way to get your attention. This is a common reaction for rabbits in captivity only.

Fear, anxiety, stress and a last resort defense mechanism against a predator may also be other reasons to play dead.

Finally, a rabbit that doesn’t want to be held right now or not comfortable and adjusted to you or this home may play dead more often.

Is It Normal for a Rabbit to Play Dead?

Yes. It is normal in common for rabbits to play dead. They will do this it at all ages and all species. Even baby rabbits learn this type of instinct from their mothers.

It might be nature or nurture, but we are not sure. This is a helpful response when facing potential threats. Baby rabbits will learn to play dead at a very young age.

How Do You Know if a Rabbit Is Playing Dead?

This is a more common tendency to play dead. If you are seeing that your rabbit is taking deeper and slower breaths, you can consider this to be flopping and not actually playing dead.

How Long Will Rabbits Play Dead?

Although there is not a set amount of time for all rabbits to play dead, they may range from a few seconds to about 10 to 15 minutes. A rabbit could be playing dead when it is scared.

Reassure your rabbit to gently allow for soothing vocal praises to be heard. Your rabbit will bond with you in the environment that you have created.

It will take more time for your rabbit to adjust and playing dead will not be observed as often as you are seeing it now.

How Do You Prevent a Rabbit From Playing Dead?

If you feel that it is uncomfortable for you to see your rabbit consistently playing dead inside your home, you should try to prevent it.

You can do so by:

If the behavior does not stop, there is such a thing as rabbit depression. A rabbit with another rabbit companion might be able to become more social and stop playing dead as they adjust more comfortably in your home. 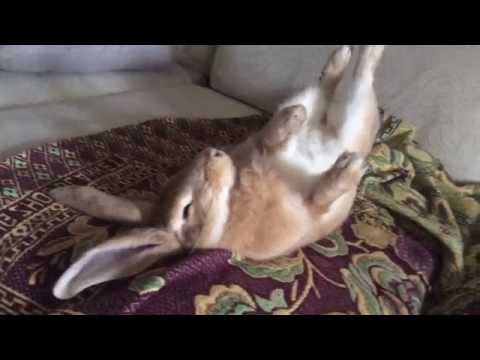 Why Is My Bunny Not Moving but Breathing?

If you noticed that your rabbit is breathing, but not moving, this could be an issue related to stress. Look for other symptoms that can help you understand what is going on at the moment. Observe the following:

Do Rabbits Die With Their Eyes Open?

Yes. There are cases of rabbits dying immediately due to multiple factors such as heart attacks and their eyes remain open. A rabbit can also die due to poisoning where their eyes do not close.

All in all, sudden death is the most common reason why a rabbit would die with their eyes open. Check for the heart rate, inspect the gums and feel the ears to make sure that they have not gone pale or cold. Your rabbit might be in shock, playing dead or flopping.

How Do I Know My Rabbit Is Playing Dead?

If you would like to know why or how your rabbit is playing dead and nothing severe is happening, listen carefully. You may hear sounds from your rabbit such as clicking of the teeth or purring.

You will still feel the heartbeat and you will also notice that the ears have not gone cold. Your rabbit is alive and well, but playing dead as a response to fear, a defense mechanism or merely trying to get your attention.

Rabbits are vulnerable to multiple predators in the wild. They are perceived threats all over the place. It is easy for a rabbit to feel spooked or frightened because they are scared they will be slaughtered.

A rabbit would choose to evade or escape, but sometimes they find themselves in the position where they cannot do so. The ultimate response might turn into playing dead when absolutely terrified and they find no other option.

This is probably not what’s going on for rabbits in captivity. They might be playing dead out of boredom, trying to catch your attention or simply haven’t adjusted to life with you and this environment yet.

Do Rabbits Play Dead When Attacked by a Predator?

There are many predators who are put off by the sight of a dead carcass. They are trained to hunt and catch their prey. Some vulnerable prey like rabbits have learned to play dead as a last resort against predators to avoid being perished.

Playing dead also creates a very vulnerable situation where the rabbit can easily be caught. Instead of playing dead, some rabbits will try to stand on their hind legs and use their claws to scratch and fight.

Can Bunnies Play Dead When Scared?

Yes. Your bunny rabbit could be playing dead when he or she is feeling scared. You might not think that there are any reasons for your rabbit to be scared, but sometimes they just do not wish to be handled.

If you are overly aggressive or even gentle cuddles that are unwanted can cause a rabbit to play dead and prevent you from picking them up.

It is an automatic response to play dead out of fear. If you noticed that your rabbit has flopped over and playing dead in your arms, gently put him or her back on the ground.

What Does It Mean When a Bunny Plays Dead?

It is hard to determine the exact reason why a bunny is playing dead. Sometimes it is out of neglect, other times it is a cry for attention.

In many cases, we assume that a rabbit is playing dead out of a defense mechanism or desire to be left alone. A rabbit that wants your attention may also do the opposite and start biting or pulling at your clothes.

Each individual rabbit has their own unique quirks and characteristics. Some rabbits will play dead more than others in captivity. They may have learned this technique from their mothers at a young age.

Is My Rabbit in Shock or Dead?

It is important to tell when your rabbit is going into shock, playing dead, flopping or dying. If the body is becoming still or limp and the heart rate is slowing down, there could be an onslaught of circulatory problems leading to shock.

Check for your rabbit’s gums to remain pink, but if they are turning pale white, this is how you know that your rabbit is in shock. A rabbit in shock may also have cold ears and their body temperature will begin to decrease.

Yes. A baby rabbit can also play dead. This is a behavior that starts at a very early age for rabbits. Rabbits can mimic their mothers in this form of coaching and will help them in many situations throughout their lives.

A rabbit could either learn this out of nurture and socialization or be born with this instinct. A baby rabbit can easily play dead because this might be the best defense mechanism when the body is not strong enough to evade predators.

What is Trancing a Rabbit?

In some emergency situations, rabbits are placed into a trance which is a form of hypnotism. We do not agree with this technique because it can absolutely scare rabbits and cause them to play dead.

Nevertheless, trancing occurs where a towel is placed on your lap and you turn the rabbit over so she is lying on her back. Place her rear end above her head and vocally soothed her with some gentle petting as well.

The assumption is that a rabbit will fall into a trance. What could actually be happening is that the rabbit is terrified and playing dead instead. The fear could become so great that a sudden heart attack could result.

Do Wolves Eat Rabbits? {Top 5 Ways to Protect Your Rabbit From Wolves}
Why Do Rabbits Need Salt Wheels? {At What Age?}
Do Rabbits Change Gender? {How You Can Tell A Male Rabbit From A Female}
How Long Can Rabbits Go Without Food and Water? {Signs & Symptoms To Look Out For)}