Goodnight sweet guinea pig. Do guinea pigs dream? Do they have visions of fresh grassy meadows and bountiful veggies and herbs?

Do guinea pigs like to be in the dark? Are guinea pigs loud at night? I hope your dreams aren’t disturbed by a restless guinea pig who can’t sleep.

In this article, we will dive deep into slumber and find out, do guinea pigs dream?

Science suggests that guinea flow through multiple stages of sleep including the REM stage. In this time, guinea pigs dreaming is highly plausible.

Rapid eye movement or REM sleep is about 1 hour on average in the sleep cycle of a guinea pig and only equates to about 10% of their total sleep time.

If guinea pigs are dreaming, it would be during this time most likely. Why Does My Guinea Pig Twitch in His Sleep?

Guinea pigs twitch the most in their sleep when they are in the deepest portion of their sleep cycle. It is highly likely that this is during REM sleep or when you see their eyes moving rapidly while they twitch.

My dog does the same thing. Sometimes they twitch together in a unified or cohesive sleep schedule during the middle of the day when they are both tired from exercise.

This is when your guinea pig is most likely dreaming.

Can Guinea Pigs Have Nightmares?

Guinea pigs are mammals who require 9-12 hours of sleep per day. They don’t get this sleep during large chunks or block hours the way we do.

Guinea pigs will take short naps throughout the day and night to reach 9-12 hours of rest in a 24 hour period. Guinea pigs are likely dreaming or having visions during the point of REM sleep.

These three factors can help us determine if our guinea pigs have slipped into a dream that is panicky or stressful.

When Do Guinea Pigs Dream?

Your guinea pig will follow your daily routines and slip into nap times when you are away or least active. This means that guinea pigs adapt to their owners even though they sleep multiple times a day and night.

The deeper the sleep, the more likely that they are dreaming. Daytime naps are not as deep as there are multiple stimuli from the light to movements around the house and outside of the property.

At night, dreaming is more likely to occur when activity around your guinea pig is greatly reduced. 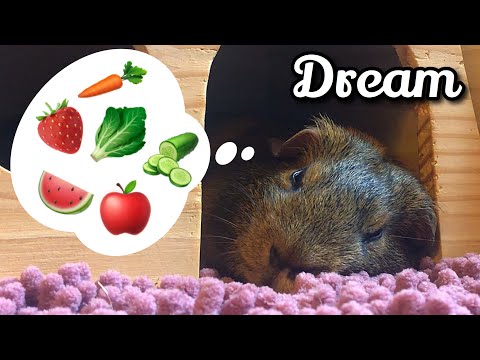 Stages of Sleep in Guinea Pigs

Here are the commonly understood stages of sleep guinea pigs undergo during their sleep cycle. It is likely that they do not pass through each stage during every short nap. Sleep is deeper at night when there is less movement, light and activity around.

Your half awake guinea is slipping into sleep. Here are some tendencies during this time:

With their eyes half open, they are doing a final check on whether or not the area and space is safe enough to slip into the dream world where predators cannot enter.

This is a very short stage where the eyes finally close shut and sleep is fully entered. The brain waves slow down and the heart rate is much slower than periods of awake, alertness and activity. Deep sleep is coming soon.

The brain starts emitting slower waves referred to as delta waves. Fast waves mix in, but the sleep level during stage 3 is much deeper. Non-rapid eye movement sleep (NREM) is transitioning to REM sleep at this point.

Also known as REM sleep. This is the most likely stage where you guinea pig is dreaming. Eyes can rapidly move, twitch or slide side to side while the lids remain closed.

Dreams can get intense, become panicky or nightmarish and your guinea pig’s brain activity can switch from slow to fast through multiple wave patterns.

What Do Guinea Pigs Dream Of?

A guinea pig is most likely dreaming of activities and memories in their recent past.

They will remember or review events that stood out in the day or meals they ate. They may also have nightmares of threats, predators and dangerous encounters they experience.

While it is impossible to know what exactly guinea pigs are dreaming about, the period where their eyes move rapidly from side to side, called REM sleep, is the best indicator that dream-like states are being witnessed by guinea pigs pet owners.

Are Guinea Pigs Loud at Night?

Unfortunately, yes. In many cases, guinea pigs are loud or noisy at night when the rest of the house is silent. This could be due to several factors.

Squeaks, rusting, screeching and shuffling are bound to occur where a guinea pig is not sleeping through the entire night.

Do Guinea Pigs Like to Be in the Dark?

Yes, the dark is a safe and preferred way for a guinea pig to feel at ease during the night. Should I keep a light on for my guinea pig? I asked this question and received a firm, “No.”

Guinea pigs wish to enter a deeper state of sleep where they can dream through their REM cycle, but they need to feel relaxed and assured that activity levels are lowered around them. The lights off help limit distractions or thoughts of potential threats.

13 Things You Must Know Before Getting a Guinea Pig
Do Guinea Pigs Learn Their Name?
Is it Okay to Have Only One Guinea Pig? {How To Keep Them Happy}
Can Guinea Pigs Go Outside On Wet Grass?