Do you have to step in when guinea pigs try to establish hierarchy?  Sometimes I get involved and say,  “Hold it guinea pigs. I’m in charge here!”

Guinea pigs are social animals that wish to establish their pecking order in the wild, but do they have to do this in your own home? Can you prevent it? Can you shorten this dominance phase?

In this article, we’ll find out how long guinea pig dominance lasts.

The guinea pig dominance that we were witnessing could have taken weeks or months if we didn’t intervene. Thankfully, we stopped it within two to three days.

We know it’s normal for guinea pigs to established hierarchy, but there are factors and conditions that we can use to help including:

My husband enjoys watching it, but it causes me stress. He likes being the referee, but I know that the dominant guinea pig will always win if I don’t step in and change things up.

All jokes aside, you can help thwart guinea pig dominance. Keep reading to find out more.

What Is Guinea Pig Dominance?

Guinea pigs are going to be aggressive with each other in many situations. One of them will try to become the dominant guinea pig when they established hierarchy.

A guinea pig that is more timid, shy or a new member of the group, may have to surrender to this dominant alpha. In their natural environment, this is quite normal. There are leaders and there are followers.

guinea pigs who have paired well together and formed a tight bond, will usually display one being more confident than the other.

If the dominance is not challenged, this could be a good thing in the long run. It may lead to less squabbles and minor fights.

What Dominant Guinea Pigs Do

A dominant guinea pig is going to act slightly more confident than the others. They may choose to put themselves forward when you arrive or when you present food. They may try to make the other guinea pigs back off.

One time, one of the males used his sharp teeth to bite the other male. Thankfully we were there to step in before things got worse. We separated the males for a while in separate cages.

We brought them back together in a neutral area, in the living room, on our lap and in the playpen. We use multiple strategies to help reduce the aggression and dominance.

Would you like to find out more about how we did it? 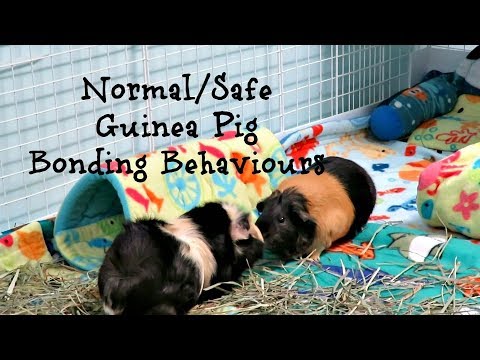 How To Stop A Dominant Guinea Pig

Sometimes we don’t need to stop these guinea pigs who are trying to be the dominant leader of the group.

If the others do not challenge the dominance, the hierarchy could be formed and peace may result leading to much less squabbles or disputes. Remember that they are only trying to mimic what they do in the wild.

With your help, dominance in guinea pigs that lead to aggression can be stopped within a few days. Do not be frustrated if it takes longer than that. Remain confident and know that you are the leader in the end.

We can tell you what happened in our home. We know that many people say that males are more dominant than females in the guinea pig world and this was true for us as well.

The two males that we placed with the female were fighting for dominance. This is something that was going to continue to last for weeks if we didn’t intervene.

Neither male was going to give up and accept inferiority to the other. They were:

Sometimes the opposite is true. Females can become dominant against each other as well. They are also known to spray urine to warn the others to back off.

What we do in terms of how we set up their habitat, how we intercept, observe, adapt and maintain a peaceful environment for them is more important than which gender of guinea pig is more dominant.

My brother called me over and told me to listen to our three guinea pigs. One of them was definitely making an intensified hissing sound. Another (female) was bashfully retreating to the far corner of the playpen. A third (male) guinea pig was standing his ground.

These were the vocal sounds that we heard while we stood nearby and witnessed what was going on. We knew from past experience that the next phase was going to be a physical one.

There could be circling, chasing, mounting and all out fighting. We separated them before any of that could occur. Sometimes when you hear the vocal cues, you can be proactive and get involved before it gets worse.

Male guinea pigs can show off their dominance in many ways including:

When the Dominance Got Out of Control

The aggressive male kept trying to display that the territory belong to him. We knew we needed a larger cage.

A 7.5 square foot cage area is the minimum recommended amount for two guinea pigs put together.
Two male guinea pigs together might need more space than this.

Heat and humidity make guinea pigs become more aggressive or irritated as well. Maintain the temperature between 60 and 85 °F.

If you bring a female into the group, do so slowly with separate cages for now. Bring them together in a neutral area and control the amount of time and playing conditions to make sure that you are the one who is always in control.

Female guinea pigs can also become aggressive and fight. In some cases, when the female is suffering from health conditions, she can become even more aggressive to warn others to back off and let her rest.

They might chase or growl with vocal confrontations. Females who develop ovarian cysts can become more aggressive or dominant.

If you introduce a new cage mate or change the environment, female guinea pig becomes very sensitive to these adjustments. They may become more territorial as a result.

Every guinea pig is different. Make sure she is healthy or visit the vet to find out if there are any underlying conditions that are leading to aggressiveness or dominance.

How To Calm Down A Guinea Pig

Dominance, aggression, bullying and fighting are common in the guinea pig world whether or not they are in captivity or in the wild. Since this is happening in our home, we need to step in.

They are territorial, but so are we. We don’t want strangers sneaking into our house and setting up residence here. Your guinea pig feels the same way.

8 Ways To Calm Down Guinea Pigs Why Is Guinea Pig Dominance Lasting So Long?

It must be very frustrating for you to hear from me or others online that guinea pig dominance can last for a couple of days. Why is this lasting weeks or months for you?

Not all guinea pigs act the same. Some are more aggressive than others. If you are adopting guinea pigs in the later stages of their life, you do not know what kind of trauma or health conditions they may have experienced in the past.

Consult the vet and get a check-up done to make sure that there aren’t any underlying issues that may cause aggressiveness. For example, a female guinea pig could become more aggressive she if she has ovarian cysts.

Sometimes two or more guinea pigs do not form a good bond with each other. It could be hormonal and may be adjusted by getting them neutered or spayed. If your guinea pigs are continuing to fight for dominance, start again.

Please two cages side-by-side with enough room in between so they cannot touch each other. Bring the cages closer together when you notice that they are giving each other constant attention.

Bring them out to a neutral area and see if their behavior is more peaceful and calm with you in charge as the dominant one.

Do not be so hard on yourself because guinea pig dominance is normal. This is what they doing in the wild and it’s going to continue to happen in many people’s homes as well.

It happened to us and now it’s your turn. We hope that it doesn’t last more than a few weeks. Make sure there is enough food, space and love to go around.

If more than two guinea pigs becomes an increasingly difficult challenge, they are many guinea pig lovers out there who can be consulted or offer to adopt the cavies who cannot give up the urge to be the dominant leader.