Do you currently care for a Red Eyed Russian Dwarf Hamster? Would you like to find why they have red eyes?

Are Russian Red Eyed Dwarf Hamsters more prone to biting? When are they more active and how to you bond with them?

In this article, we will dedicate our effort to explore the topic of the Red Eyed Russian Dwarf Hamster.

A Russian dwarf hamster with red eyes (Phodopus campbelli), grows to about 4 inches with a lifespan of 2-3 years. Campbell’s dwarf Russian hamsters are quick to bite or nip at you if they feel that you are a threat.

They frighten easily, but will warm up to you with bonding and trust building. Russian dwarf hamsters like to sleep most of the day and remain active at night. The red eyes are a form of albinism due to a lack of pigments which doesn’t give them the dominant black eye color. Russian dwarf hamsters are docile during the day for the most part. This is when they are more sleepy as they enjoy being active at night. They are very quick and nimble and sometimes this makes them hard to pick up.

Children may have difficulty handling this specific species. Russian dwarf hamsters get along in pairs, groups and on their own. Introduce them to same-sex pairs at an early age to reduce any issues with bullying or difficulty adjusting to each other.

Russian dwarf hamsters have a tendency to bite when they feel scared. They are frightened easily, but will trust you and bond with you over time.

The bite is more of a nip and should not hurt as much as Syrian hamsters. They have tiny teeth, but you should try to discourage the biting by stopping play time and putting them back in their cage when they do so.

Sometimes a Russian red eye dwarf hamster will be born with red eyes and this can change with time. As they age, the red eyes that are light in color will darken. They may remain red or turn so dark that it will be hard to tell the color. 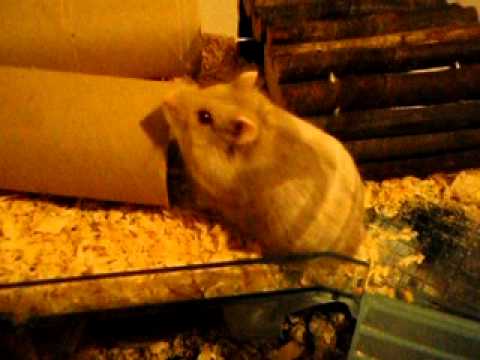 A hamster of all species with red eyes means they lack the pigment to develop the black color that most hamsters have. They didn’t develop black eyes because of a form of albinism.

Black eyes are the more dominant color. Just because your Russian dwarf hamster has red eyes, doesn’t change their behavioral traits puts them in another category. They will learn and live with you in a trusting and bonded relationship just like one that has black eyes.

Do Hamsters With Red Eyes Bite?

They lack pigmentation in a condition known as albinism. There should be no difference in a hamster’s behavior if they have red eyes or black eyes. Dwarf hamsters may feel the need to nip or bite because they may get scared easier due to their diminutive size.

Why Do Russian Dwarf Hamsters Have Red Eyes?

Many Russian dwarf hamsters seem to be more likely to have red eyes. This lack of pigments in their eyes can affect their vision. Their eyes might see more poorly than hamsters with black eyes.

This could make them more skittish and threatened by large moving objects in their field of vision. A red-eyed Russian dwarf hamster may feel the need to nip at someone who approaches their face or body.

Where Do Russian Dwarf Hamsters Live in the Wild?

The Russian dwarf hamster’s natural habitat in the wild is usually found in dry or arid regions from central Asia. They like:

Russian dwarf hamsters were discovered by researchers in 1903 in central Asia and they have since scattered their population due to captive breeding and releasing. You won’t see them doing too much during the day, but you may hear them rustling in their cage at night. Hopefully you are not keeping their cage too close to your bedroom or else they may wake you up!

How Long Do Russian Dwarf Hamsters Live as Pets?

Health conditions run the risk of their lifespan being cut short. A red-eyed Russian dwarf hamster could live as long as a black eyed dwarf hamster.

Are Russian and Dwarf Hamsters the Same?

The Campbell’s Russian Dwarf Hamster is also simply referred to as Russian hamsters. They are smaller in size and grow around 4 inches or up to 8cm. They are fine to live in same sex pairs or groups.

Dwarf hamsters and Russian hamsters are technically the same, but there are other dwarf species as well.

How Do You Bond With a Russian Dwarf Hamster?

Bonding with your Russian dwarf hamster takes a little time and patience.

Keep in mind that Russian dwarf hamsters are more active at night so it is best to change up the times that you interact with them in this way. Make them understand that you are always nearby in this safe and secure space.

What to Do With Old Hamster Cage {Best Ways to Clean and Dispose}
Can You Use WD40 on a Hamster Wheel? {Is It Safe?}
Is Fabric Safe for Hamsters? {What Are The Risks?}
Can You Use Polysporin On Hamsters? {Safe To Use?}